What is Earned Value Management and Uses?

Have you ever asked yourself any of these questions?

Earned Value Management (Hereinafter referred to as “EVM” also) is a project management method that integrates scope, schedule, and cost to assess how the project is performing against the project plan.

In other words, It is a method for measuring and assessing project performance (time and cost) by integrating

Budget, earned value, actual costs, and predictions are the four primary components of a project’s study. To get a complete view of the project’s progress, you’ll need all four. When you merely look at the budget vs the actual expenditures, you’ll almost always get the wrong picture.

For example, if project spending is 10% below budget, it may look like the project is performing effectively. When the project status or earned value is included in the analysis, however, it may reveal that just half of the work that was initially intended has been completed. If that’s the case, we’ve got a project that’s much behind schedule, and the final amount will be substantially higher than expected!

By providing a uniform unit of measurement and a consistent methodology for reporting progress. Moreover, EVM provides an objective measure to assess cost and schedule project performance.

And, by integrating the scope of work with the budget and actual costs, a better picture of project progress can obtain. 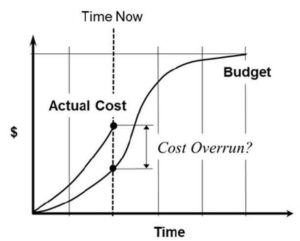 From the above figure,

During a specific period of time, when the actual cost is compared with budgeted costs, a variance is calculated.

This variance is traditionally used to determine whether a project is under budget or over budget.

Thus, When actual cost is compared to the budget cost, a spending variance rather than a cost variance is found, which does not properly represent an overrun or underrun.

This is the result of the fact that the actual cost of completed work should not be compared to the planned cost of the work budget.

From the above figure, there is a possibility of two scenario’s

Earned Value Management is apparent that comparing the budget to the actual cost makes it very hard to determine a true picture of project progress.

And, tell us your queries in the below comment box.