What is Passenger Car Unit (PCU)?

Passenger Car Unit (here in after referred as PCU) is a vehicle unit  or car unit used to measure the rate of traffic flow on highway. In other words, PCU is a measure of number of vehicles moving on a highway at a given point of time. In some instances, PCU is referred to as Passenger Car Equivalent (PCE).

Traffic flow is a measure of flow of vehicles on a road from one point to another point at a given point of time. The flow of traffic on highway consists of different classes of vehicles that are classed as follows:

WHAT IS PASSENGER CAR?

To describe the entire traffic flow on a highway per unit time, the flow of various vehicle classes must be converted into a single standard vehicle type, such as Passenger Car. As a result, Equivalency factor known as passenger car unit (PCU) is allotted to each vehicle type.

Unless the various vehicle classes are converted to a single common standard vehicle unit, estimating the traffic volume of roadway facilities under mixed traffic flows is difficult.

The different vehicle classes have a wide range of static and dynamic properties, such as length, width, and so on. Apart from that, the driver behavior of various vehicle types is found to differ significantly. As a result, mixed traffic flow characteristics are far more complex than homogeneous traffic consisting solely of passenger cars.

PCU per hour per lane width or PCU per hour for the full roadway are used to describe the capacity of various types of roadway facilities with mixed traffic flow, such as highways in rural areas and roads in urban areas. 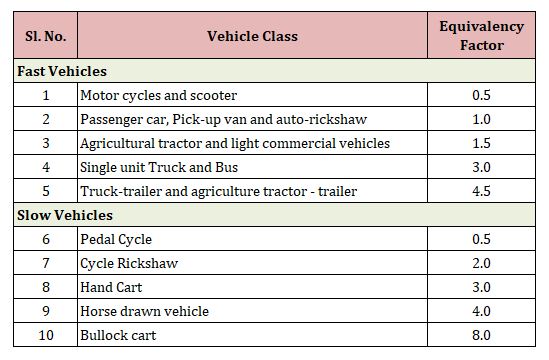 PCU Values recommended by the IRC 064: 1990 for different types of vehicles on roads in rural areas

Equivalency factors will differ depending on the terrain, such as rolling/hilly sections. Since the influence of terrain in the design of service volumes for traffic in various terrains has been accounted for in a consolidated way. Therefore, IRC has proposed a range of PCU values in India for different types of vehicles on urban roads. 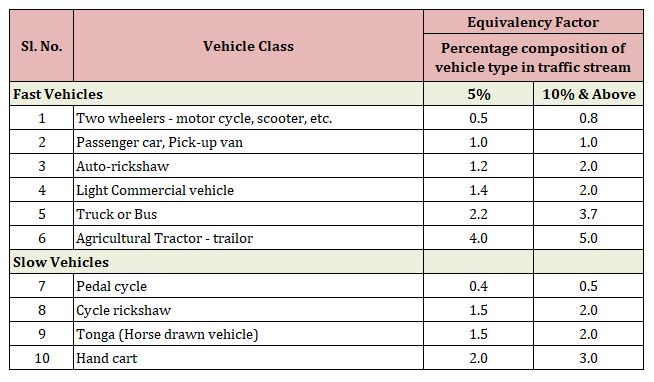 PCU Values recommended by the IRC 106: 1990 for different types of vehicles on roads in urban areas

The different types of methods mostly used to determine the different vehicle classes of PCU values are:

Several factors influence the PCU values of different vehicle types. such as

And, tell us your queries in the below comment box.

Also Read: What is Dowel Bar?